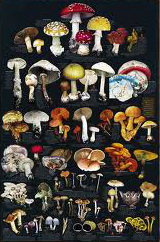 Abstract
Inonotus baumii, a traditional medicinal mushroom, has been historically used in China and other countries of East Asia for the treatment of various diseases. The aim of this study is to investigate the antitumor activity of the extract of I. baumii (EIB) against hepatocellular carcinoma and the possible mechanism involved. The MTT assay was used to evaluate the proliferative activity of SMMC-7721 cells treated with EIB. Hoechst 33258 and JC-1 staining were used to determine nuclear morphological changes and mitochondrial membrane potential, respectively. Flow cytometry analysis indicated that EIB blocked the cell cycle at the S phase and induced significant apoptosis. EIB increased the protein expression of Bax, cytochrome c, cleaved caspase-3, and decreased Bcl-2 in SMMC-7721. Moreover, EIB induced autophagy, indicated by the increase of autophagy-related protein expression of LC3-II and decrease of p62, and the AMPK/mTOR/ULK1 pathway was involved in the autophagic cell death. In vivo, EIB was found to strongly inhibit the growth of tumors in BALB/c nude mice. Our results indicated that I. baumii might be a potential natural therapeutic agent for liver cancer, as it could induce apoptosis and autophagy in HCC cells.


Abstract
Bone homeostasis destruction is triggered by the uncontrolled activity of osteoblasts and osteoclasts. Targeting both the regulation of bone formation and resorption is a promising strategy for treating bone disorders. Cordycepin is a major component of Chinese caterpillar fungus Cordyceps militaris. It exerts a variety of biological actions in various cells and animal models. However, its function on bone metabolism remains unclear. In the present study, we discovered a dual-action function of cordycepin in murine MC3T3-E1 and RAW264.7 cells. MC3T3-E1 cells were cultured in an osteogenic medium in the presence of 1 μM cordycepin for up two weeks. Cordycepin was used for effects of osteoblast and osteoclast differentiation. Cell viability was measured using the MTT assay. Osteoblast differentiation was confirmed by alizarin red staining, ALP activity, western blot, and real-time PCR. Osteoclast differentiation and autophagic activity were confirmed via TRAP staining, pit formation assay, confocal microscopy, western blot, and real-time PCR. Cordycepin promoted osteoblast differentiation, matrix mineralization, and induction of osteoblast markers via BMP2/Runx2/Osterix pathway. On the other hand, RAW264.7 cells were differentiated into osteoclast by RANKL treatment for 72 h. 1 μM cordycepin significantly inhibited RANKL-induced osteoclast formation and resorption activity through disturbing the actin ring-formatted sealing zone and activating cathepsin K and MMP9. These findings indicate that cordycepin might be an innovative dual-action therapeutic agent for bone disease caused by an imbalance of osteoblasts and osteoclasts.

Abstract
​Background
In terms of melanoma, recent advances have been made in target therapies and immune checkpoint inhibitors, but durable remission is rare. Ganoderma immunomodulatory proteins (GMI) induce a cytotoxic effect in cancer cells via autophagy. However, the role of GMI in melanoma is not clear.

Purpose
The aims of this study are to investigate the inhibiting effects of GMI combined with chidamide on survival and metastases of melanoma cells via integrin-related signaling pathway and to propose strategies for combining GMI and chidamide using animal model.

Methods
Cell viability was measured by cell CCK-8. The activities of apoptosis- and migration-related proteins were detected on Western blot. Flow cytometry was used to analyze cell cycle distribution and sub-G1 fraction in treated melanoma cells. To evaluate the activity of combination GMI and chidamide treatment, an in vivo anti-tumor metastasis study was performed.

Abstract
Antrodia camphorata has previously demonstrated the efficacy in treating cancer and anti-inflammation. In this study, we are the first to evaluate Antrodia camphorata alcohol extract (ACAE) for osteoporosis recovery in vitro with preosteoblast cells (MC3T3-E1) and in vivo with an osteoporosis mouse model established in our previous studies, ovariectomized senescence accelerated mice (OVX-SAMP8). Our results demonstrated that ACAE treatment was slightly cytotoxic to preosteoblast at 25 μg/mL, by which the osteogenic gene expression (RUNX2, OPN, and OCN) was significantly upregulated with an increased ratio of OPG to RANKL, indicating maintenance of the bone matrix through inhibition of osteoclastic pathway. Additionally, evaluation by Alizarin Red S staining showed increased mineralization in ACAE-treated preosteoblasts. For in vivo study, our results indicated that ACAE inhibits bone loss and significantly increases percentage bone volume, trabecular bone number, and bone mineral density in OVX-SAMP8 mice treated with ACAE. Collectively, in vitro and in vivoresults showed that ACAE could promote osteogenesis and prevent bone loss and should be considered an evidence-based complementary and alternative medicine for osteoporosis therapy through the maintenance of bone health.

Abstract
ETHNOPHARMACOLOGICAL RELEVANCE:Anti-inflammatory therapy has been intensively investigated as a potential strategy for treatment of cerebral stroke. However, despite many positive outcomes reported in animal studies, anti-inflammatory treatments have not proven successful in humans as yet. Although immunomodulatory activity and safety of Cordyceps species (Chinese caterpillar fungi) have been proven in clinical trials and traditional Asian prescriptions for inflammatory diseases, its anti-ischemic effect remains elusive.

AIM OF THE STUDY:In the present study, therefore, we investigated the potential therapeutic efficacy of WIB801C, the standardized extract of C. militaris, for treatment of cerebral ischemic stroke.

MATERIALS AND METHODS:The anti-chemotactic activity of WIB801C was assayed in cultured rat microglia/macrophages. Sprague-Dawley rats were subjected to ischemic stroke via either transient (1.5-h tMCAO and subsequent 24-h reperfusion) or permanent middle cerebral artery occlusion (pMCAO for 24-h without reperfusion). WIB801C was orally administered twice at 3-and 8-h (50 mg/kg each) after the onset of MCAO. Infarct volume, edema, blood brain barrier and white matter damages, neurological deficits, and long-term survival rates were investigated. The infiltration of inflammatory cells into ischemic lesions was assayed by immunostaining.

Abstract
This study reports the combination of Ginkgo flavonoid (GF) and Coriolus versicolor polysaccharide (CVP) in the prevention and treatment of a mouse model of Alzheimer's disease (AD). GF is a traditional health product, and CVP is the main active ingredient of the medicinal fungus Coriolus versicolor. The Morris water maze test, the Y maze, and the step-through test showed that the combinational use of CVP and GF synergistically improved memory in a mouse model of AD. Based on H&E staining analysis, the combination of CVP and GF decreased the severity of the pathological findings in the brain. Given that the expression of IL-1β, IL-6, and TNF-α was downregulated, the inflammation response in AD mice was considered to be inhibited. The downregulation of GFAP further demonstrated that inflammation was reduced in the brain of AD mice following treatment. Moreover, the expression levels of superoxide dismutase (SOD) and catalase (CAT) were elevated in the brains of treated mice, indicating that oxidation levels were reduced upon the combination treatment. Our results provide new insights into the efficient utilization of traditional medicine for preventing dementia.

Abstract
Mushrooms represent an important food source and are recommended for diabetics because of their low glycemic index due to content nutrients. The beneficial effect of products from mushrooms was evaluated under experimental diabetes in mice. The study was performed on extracts and powder respectively from three species of fungi, two of which are edible and cultivated (Pleurotus ostreatus - powder and extract, Agaricus bisporus brown - powder and extract) and one is parasite (Fomes fomentarius - extract).
Among the extracts a positive effect on blood glucose was recorded in the group treated with Fomes fomentarius extract (31.35% reduction) and from the group treated with Pleurotus ostreatus powder (20.24% reduction). Cholesterol reduction level was between 5.23% (Fomes fomentarius) and 15.46% (Agaricus bisporus brown extract). For A.bisporus brown the extract registered better results, while for P. ostreatus the powder was more active. Extracts administration did not result in a return to the control group registered values for liver function tests (ALT, AST, alkaline phosphatase), but determined evident beneficial effects compared with diabetic group and could counteract hepatocellular damage in diabetes.

Abstract
Age-related diseases such as type 2 diabetes, cardiovascular disease, and cancer involve epigenetic modifications, where accumulation of minute changes in the epigenome over time leads to disease manifestation. Epigenetic changes are influenced by life style and diets. This represents an avenue whereby dietary components could accelerate or prevent age-related diseases through their effects on epigenetic modifications. Therefore, new therapeutic approaches are needed to treat them more efficiently....... The medicinal effects attributed to fungi, based mainly on uncharacterized substances or extracts, include antiviral, immunomodulatory, antitumor, antioxidant, radical scavenging, anti-inflammatory, antihyperlipidemic or antihypercholesterolemic, hepatoprotective, and antidiabetic effects.

Abstract
Antrodia cinnamomea (AC) is an endemic mushroom species of Taiwan, and has been demonstrated to possess diverse biological and pharmacological activities, such as anti-hypertension, anti-hyperlipidemia, anti-inflammation, anti-oxidation, anti-tumor, and immunomodulation. This review focuses on the inhibitory effects of AC on hepatitis, hepatocarcinoma, and alcohol-induced liver diseases (e.g., fatty liver, fibrosis). The relevant biochemical and molecular mechanisms are addressed. Overall, this review summarizes the hepatoprotective activities in vitro and in vivo. However, there is no doubt that human and clinical trials are still limited, and further studies are required for the development of AC-related products.