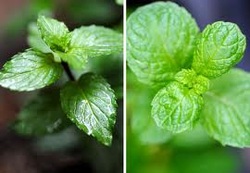 Abstract
Various plant extracts have great potential against infectious agents and can be used for therapeutic purposes. This study was carried out to evaluate the antimicrobial activities of peppermint (Mentha piperita) extracts against 10 multidrug resistant (MDR) pathogenic bacterial clinical isolates.The antibacterial activities of ethanol, methanol, ethyl acetate and chloroform peppermint extracts were assessed using the standard minimal inhibitory concentration (MIC) and minimal bactericidal concentration (MBC) methods. Overall, the ethyl acetate extract of peppermint had strong growth inhibitory effects on the tested pathogens, followed by the chloroform, ethanol and methanol extracts. The inhibitory activity of the ethyl acetate extract against all Gram-negative pathogens was higher than that of chloroform (10–80 mg/ml), methanol (10– > 80 mg/ml) and ethanol (40– > 80 mg/ml). The lowest MIC value was seen for Streptococcus pyogenes (1.25 mg/ml for ethyl acetate extract), followed by methicillin-resistant Staphylococcus epidermidis (MRSE) and Enterococcus faecalis (2.5 mg/ml for ethyl acetate extract).The MBC values of all extracts were higher than the corresponding MIC values for the majority of pathogens. This study highlights the potential antibacterial activity for M. piperita extracts, especially the ethyl acetate extract, against MDR S. pyogenes, E. faecalis, methicillin-resistant Staphylococcus aureus (MRSA), MRSE and carbapenem-resistant E. coli, and Klebsiella pneumonia clinical isolates. Further in vitro and in vivo studies on a large number of clinical isolates of MRSA, Acinetobacter baumannii and Stenotrophomonas maltophilia are necessary to further investigate and standardize the inhibitory effect of peppermint extracts against these emerging pathogens.

Materials and methodThis double-blind clinical trial was conducted on 102 eligible female students (aged 18–25) living in the dormitories of North Khorasan University of Shirvan from August 2014 to February 2015. The study subjects were initially matched in terms of the reported severity of primary dysmenorrhea and then divided into a peppermint capsule group (46 students) and a placebo group (44 students). The treatment group received three 330 mg peppermint capsules per day, and the placebo group received three identical placebo capsules containing starch, which were taken from the first to the third day of their menstrual cycle with identical administrations. The severity of pain was measured and compared before the intervention and over two successive cycles based on a visual analogue scale (0–10 cm). The data obtained was analyzed in SPSS-17 using the independent t-test and the ANOVA at the significance level of P < 0.05 .

The formulation (IBgard, IM HealthScience) contains purified, coated microbeads of peppermint oil that can pass through the stomach to dissolve slowly in the small intestine. The randomized controlled trial found that patients with IBS who took the peppermint oil reported a 40% decline in bowel symptoms and nearly a 50% decrease in symptom intensity from baseline, according to the researchers.

Peppermint oil, which contains L-menthol, is approved for the treatment of IBS in Europe, where it is used as a first-line therapy for the condition. However, clinicians in the United States have not embraced the substance, nor does it have FDA approval for IBS. The formulation used in the latest study is available over the counter as a “medical food.” Manufacturers of medical foods can make disease claims about their products but do not have to conduct randomized controlled trials to prove those claims.

The new study, the IBSREST (Irritable Bowel Syndrome Reduction Evaluation and Safety Trial), included 72 men and women with moderate IBS who received either peppermint oil or placebo for four weeks.

After one week, patients taking the peppermint oil reported a statistically significant improvement in total IBS symptoms, which declined by 40% compared with baseline (P<0.0001). Symptom severity also fell, by 49% (P<0.0001), as did mean frequency of symptoms (P<0.0001; Table - click Source below).

The difference between active therapy and placebo also was statistically significant for reduction in total symptoms (P=0.025) and symptom intensity (P=0.028). The oil was well tolerated, and no patient discontinued the study because of problems with the therapy, according to the researchers.


Phytotherapy for Polycystic Ovarian Syndrome: A review of the literature and evaluation of practitioners’ experiences
Abstract
Background
Polycystic Ovarian Syndrome (PCOS) is a common, complex, endocrine condition with potential long-term cardiovascular, endocrine and metabolic health implications. Currently, there exists no medical treatment that addresses all clinical presentations. Herbal practitioners often treat women with PCOS; yet, there is a lack of research investigating PCOS and herbal treatment. This study aimed to examine the current scientific literature on PCOS and phytotherapy, explore practitioners’ experiences treating women with the syndrome and evaluate whether there is a role for phytotherapy in the treatment of PCOS.

Methods
A literature search was conducted using the terms; ‘Polycystic Ovarian Syndrome’/‘PCOS’ and ‘phytotherapy’/‘herbal medicine’/‘herbs’. The published research identified by these terms was then reviewed. A brief questionnaire with a mix of eleven open and closed questions was sent to herbal practitioners on the National Institute of Medical Herbalists (NIMH) 2012 register.

Results
The literature review found promising results for the use of Mentha spicata, Cinnamomum verum and berberine containing herbs. There was a weaker evidence base for the use of Glycyrrhiza glabra and Paeonia lactiflora. The questionnaire was completed by 72 practitioners, 71% had treated women with PCOS. The majority (38%, n = 50) felt herbal medicine was ‘quite successful’ in treating PCOS. The average time until herbal treatment started to be successful was 3.2 months. The most frequently used herbs were P. lactiflora, G. glabra and Vitex agnus castus. Dietary and lifestyle advice emerged as frequently identified therapeutic interventions.

Conclusions
This exploratory study suggests that there is a role for phytotherapy in the treatment of PCOS. Further investigation, consisting of well-designed clinical trials and monitoring the successful use of herbal medicine by practitioners, is clearly necessary. This future research would serve to substantiate positive empirical evidence, constructing a more robust evidence base for the effective use of phytotherapy as a therapeutic option for women with PCOS.

ST. LOUIS -- Enhanced extracts made from special antioxidants in spearmint and rosemary improve learning and memory, a study in an animal model at Saint Louis University found.

"We found that these proprietary compounds reduce deficits caused by mild cognitive impairment, which can be a precursor to Alzheimer's disease," said Susan Farr, Ph.D., research professor geriatrics at Saint Louis University School of Medicine.

Farr added, "This probably means eating spearmint and rosemary is good for you. However, our experiments were in an animal model and I don't know how much -- or if any amount -- of these herbs people would have to consume for learning and memory to improve. In other words, I'm not suggesting that people chew more gum at this point."

Farr presented the early findings at Neuroscience 2013, a meeting of 32,000 on Monday, Nov. 11. She tested a novel antioxidant-based ingredient made from spearmint extract and two different doses of a similar antioxidant made from rosemary extract on mice that have age-related cognitive decline.

Further, there were signs of reduced oxidative stress, which is considered a hallmark of age-related decline, in the part of the brain that controls learning and memory.

"Our research suggests these extracts made from herbs might have beneficial effects on altering the course of age-associated cognitive decline," Farr said. "It's worth additional study."

The research, which was supported by the VA Medical Center in St. Louis, was conducted in conjunction with Kemin Industries, which  manufactures specialty ingredients for vitamin/dietary supplements or that can be added to food to enhance its nutritional and health  benefits.

Established in 1836, the School of Medicine has the distinction of awarding the first medical degree west of the Mississippi River. The  school educates physicians and biomedical scientists, conducts medical research, and provides health care on a local, national and international level. Research at the school seeks new cures and treatments in five key areas: infectious disease, liver disease, aging and brain disease, cancer and heart/lung disease.


Why Peppermint May Relieve IBS

Summary
Often, abdominal pain occurs in Irritable Bowel Syndrome (IBS). This is because the sensory nerves from the gut are hypersensitive to mechanical stimulation. Peppermint produces a cooling sensation and is known to provide relief from symptoms of IBS. The current study that was conducted on mice found that icilin, a cooling agent, reduced the sensitivity of the sensory nerve fibers from the gut. This might explain the mechanism by which peppermint and certain herbal remedies help to reduce abdominal pain. Drugs that modify the presence and activity of the transient receptor potential ion channel melastatin subtype 8 (TRPM8) channels in the gut wall may facilitate ushering new therapies for treating IBS in the future.


Introduction
One of the prominent symptoms of IBS is abdominal pain, caused due to distension of the gut. Colon, which is a part of the gut, becomes sensitive to mechanical pressure. The pain is caused by the nerves connecting the colon and spinal column. Administration of peppermint reduces the severity of the abdominal pain in patients with IBS, but the exact mechanism of this action of peppermint is not known. TRPM8 channels are specific sites located in the sensory nerves of colon and spinal ganglia that respond to cool temperature and cooling sensation producing agents like peppermint. This study is aimed at characterizing the presence and functions of TRPM8 channels in mice colon. It identifies a role for TRPM8 in modulating the signals of visceral events.

Conclusion
In IBS, abdominal pain is felt due to hypersensitivity of the gut nerves. This study explains why peppermint and certain herbal remedies reduce the symptoms of IBS. This study provides evidence for the TRPM8 expression in colonic afferent neurons. The intestinal nerve fiber and their connections in the spinal canal were identified by special tracers. The expression of TRPM8 channels that are involved in conducting sensory stimuli of cooling and altering the properties of mechanoreceptive colonic afferent endings were also studied. It was found that the application of cooling agents like icilin reduces the sensitivity of nerve fibers of the colon to mechanical stimulation. Peppermint and some herbal medicines also produce a cooling sensation and these agents might act and reduce the sensitivity of gut nerve fibers.