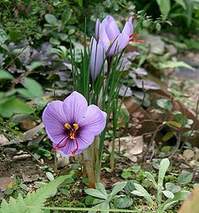 Abstract
Objective: Attention-deficit/hyperactivity disorder (ADHD) is one of the most common neuropsychiatric disorders of childhood and adolescence. About 30% of patients do not respond to stimulants or cannot tolerate their side effects. Thus, alternative medication, like herbal medicine, should be considered. The aim of this trial is to compare the safety and efficacy of Crocus sativus (saffron) versus methylphenidate in improving symptoms of children with ADHD.

Methods: In a 6-week randomized double-blind study, 54 patients (children 6–17 years old) with a Diagnostic and Statistical Manual of Mental Disorders, Fifth Edition (DSM-5) diagnosis of ADHD were randomly assigned to receive either 20–30 mg/d (20 mg/d for <30 kg and 30 mg/d for >30 kg) methylphenidate (MPH) or 20–30 mg/d saffron capsules depending on weight (20 mg/d for <30 kg and 30 mg/d for >30 kg). Symptoms were assessed using the Teacher and Parent Attention-Deficit/Hyperactivity Disorder Rating Scale-IV (ADHD-RS-IV) at baseline and weeks 3 and 6.

Results: Fifty patients completed the trial. General linear model repeated measures showed no significant difference between the two groups on Parent and Teacher Rating Scale scores (F = 0.749, df = 1.317, p = 0.425, and F = 0.249, df = 1.410, p = 0.701, respectively). Changes in Teacher and Parent ADHD Rating Scale scores from baseline to the study end were not significantly different between the saffron group and the MPH group (p = 0.731 and p = 0.883, respectively). The frequency of adverse effects was similar between saffron and MPH groups.

Abstract
​Objective:Aging is a multifactorial phenomenon, which attribute to different diseases and abnormalities in living systems. Oxidative stress, which is an important factor in aging, exacerbates this process via different mechanisms. Crocin (CR), one of the active components of saffron showed strong antioxidant effects. In the present study, anti-aging property of crocin was investigated in mice.

Materials and Methods:The model of aging was induced using administration of d-galactose (500 mg/kg, s. c.) for 42 days. Animals were treated with crocin (10, 20, 40 mg/kg, i.p.) during treatment with d-galactose. At the end of treatment, levels of malondialdehyde (MDA) as a lipid peroxidation marker and glutathione content (GSH) in the liver and brain were measured. Also, biochemical factors including liver enzymes (ALT and AST), male sex hormones including testosterone and dehydroepiandrosterone-sulfate (DHEA-SO4) and pro-inflammatory markers such as tumor necrosis factor -α (TNF-α) and interlukine-6 (IL-6) in serum, were evaluated.

Results:Administration of d-galactose led to induction of lipid peroxidation in liver and brain tissues, as well as elevation of AST, ALT, and pro-inflammatory cytokines and reduction of male sex hormones levels in serum. Interestingly, treatment of animals with crocin (10, 20 and 40 mg/kg) diminished lipid peroxidation in the liver and brain tissues while elevated GSH content. Also, a decline in serum levels of TNF-α and IL-6 and an elevation of male sex hormones were observed following treatment with crocin.

Conclusion:Administration of crocin reduced d-galactose-induced aging in mice through inhibition of oxidative stress, reduction of inflammation and elevation of sex hormones.

Abstract
​Objectives:A correlation between hyperhomocysteinemia, and depression has been reported. Saffron (Crocus sativus) is recommended for treatment of depression; hence, in this study the effect of co-administration of saffron and fluoxetine on plasma homocysteine and depression was evaluated.

Material and methods:This was a 4-week randomized and double-blind clinical trial which was conducted from March 2013 to February 2014. In this trial, 40 male and females (20-55 years old) diagnosed with severe depression were selected and following filing the Beck form, were randomly divided into two groups. Experimental group was treated with fluoxetine 20 mg/day and saffron 30 mg /day and the control group received placebo and fluoxetine 20 mg/day for four weeks. Before treatment and at the end of the study, fasting blood samples were collected. For females, blood samples were collected on the third day of their menstrual cycle.

Conclusion:Saffron has beneficial effects on depression and homocysteine level in patients with major depression.

Abstract
Herbal products, especially Hypericum perforatum extracts, have been widely used as first-line treatments for mild to moderate depression. Recently, several randomized, controlled clinical trials have been conducted to evaluate the efficacy of another plant, saffron (Crocus sativus), in mild to moderate depression. We have carried out a literature review of currently available published randomized, controlled clinical trials to give an up-to-date evaluation of the efficacy of saffron in mild to moderate depression, compared to placebo or routinely used antidepressants. The meta-analysis is reported according to the preferred reporting items for systematic reviews and meta-analyses (PRISMA) guidelines using the PICO (patients, intervention, comparison, outcome) format and was conducted using the statistical programs Comprehensive Meta-analysis and RevMan. PubMed, Embase, the Cochrane Central Register of Controlled Trials, and Web of Science databases were searched for relevant studies. Only placebo or active controlled, randomized clinical studies involving patients suffering from mild to moderate depression and using pharmacological doses of saffron per os were included. Hedgesʼ g was used to calculate effect sizes. Risk of bias was assessed using the Cochrane Collaboration tool, and heterogeneity was tested by both performing the Cochranʼs Q test and calculating Higginsʼ I2 indicator. Eleven randomized trials were included in the qualitative analysis, and nine were pooled for statistical analysis. According to the present meta-analysis, saffron has a significant effect on the severity of depression. Available data from randomized, controlled clinical trials support that saffron is significantly more effective than placebo (g = 0.891; 95% CI: 0.369 – 1.412, p = 0.001), and non-inferior to tested antidepressant drugs (g = − 0.246; 95% CI: − 0.495 – 0.004, p = 0.053).

Abstract
Crocus sativus is a spice with various pharmacological properties. Crocin, picrocrocin, and safranal are the main compositions of saffron that have recently been considered in the therapy of many diseases. High-performance liquid chromatography analysis revealed presence of these compounds in our saffron extract. This study was carried out to evaluate the effect of saffron on burn wound healing at an in vivo model. Saffron was topically applied on burn wounds in rats; the percentage of wound closure, wound contraction, and the levels of main cytokines and growth factors were measured. The saffron extract was also applied to evaluate the proliferation and migration of human dermal fibroblast (HDF) cells using in vitro scratch assay and resulted in active proliferation and migration of the HDF cells in a dose-dependent manner. A clear enhanced healing was observed in the saffron-treated wounds compared to the silver sulfadiazine and negative control groups. Decreased expression of interleukin-1β and transforming growth factor-β1 (TGF-β1) during the inflammatory phase demonstrated the role of saffron in promoting wound healing. In addition, enhanced TGF-β1 expression during the proliferative phase and basic fibroblast growth factor during the remodeling phase represented regenerative and anti-scarring role of saffron, respectively. Our histological and biochemical findings also confirmed that saffron significantly stimulated burn wound healing by modulating healing phases. Therefore, saffron can be an optimal option in
promoting skin repair and regeneration. Application of this herbal medicinal drug should be encouraged because of its availability and negligible side effects

​Protective effects of saffron extract and crocin supplementation on fatty liver tissue of high-fat diet-induced obese rats
Abstract
Background Saffron is the dried stigma of Crocus sativus L. flower which commonly used as a natural remedy to enhance health and even fights disease in the Middle-East and Southeast Asian countries.

Methods This study was aimed to investigate protective effect of saffron extract and crocin in fatty liver tissue of high-fat diet induced obese rats. A total of 36 healthy male ﻿Sprague Dawley ﻿rats were divided into six groups. Two groups served as controls, a normal diet (ND) and a high-fat diet (HFD). The other four groups were each supplemented with saffron extract and crocin at concentrations of 40 and 80 mg/kg body weight/day for 8 weeks. All groups except ND were fed with HFD until end of the study. At baseline, blood sample was collected for determination of levels of hepatic marker enzymes, including aspartate aminotransferase, alanine aminotransferase, alkaline phosphatise and albumin. Liver sample was collected, weighed and stained with haematoxylin and eosin for further histopathological examination.

Results Saffron extract and crocin at concentrations of 40 and 80 mg/kg had dose-dependently alleviated levels of liver enzymes and histopathological changes in diet-induced obese rat model compared to control (HFD group).

Abstract
BACKGROUND:Depression and anxiety are prevalent serious psychiatric disorders. Several drugs are used to treat these conditions but these are often associated with serious side effects. For this reason alternative therapies, including herbal medication such as saffron, have been proposed. We aimed to assess the effects of saffron extract for the treatment of anxiety and depression using a 12-week double-blind, placebo-controlled trial design.

RESULTS:Saffron supplements had a significant effect on the BDI and BAI scores of subjects in comparison to placebo at the 12 week time-point (p<0.001).

CONCLUSIONS:Saffron appears to have a significant impact in the treatment of anxiety and depression disorder. Side effects were rare.

Abstract
Introduction
Premenstrual syndrome is one of the most common problems for women during their reproductive age and has wider impacts affecting their family and their work. Herbal products are a suggested way of treating the syndrome. This research was carried out to identify whether saffron could have an effect on the severity of premenstrual syndrome among female students.

Conclusion
The results of this study suggest that saffron reduces the severity of PMS symptoms, but in order to prove its effectiveness for the treatment of this syndrome, further research is warranted.

Abstract
Recent studies involving human and animal models have identified that saffron helps in the improvement of depression. Antidepressants are known to function in part by increasing brain serotonin, norepinephrine and dopamine concentrations. Therefore, to identify the cellular and molecular mechanism(s) underlying this property of saffron, we measured changes in rat brain dopamine, serotonin, norepinephrine and glutamate concentrations after administration of varying doses of an aqueous extract of saffron stigma. Male Wistar rats (250 ± 30 g) were administered a single dose of saffron extract (5, 25, 50, 100, 150, and 250 mg/kg, i.p.), fluoxetine (10 mg/kg, i.p.), and/or desipramine (50 mg/kg, i.p.) and were sacrificed 30 min later. Brains were removed, homogenized, and centrifuged at 4˚C. The supernatant was used for subsequent neurotransmitter detection by ELISA. Our results indicated that the aqueous extract of saffron (50, 100, 150 and 250 mg/kg, i.p.) increased brain dopamine concentration in a dose-dependent manner compared with saline. In addition, the brain glutamate concentration increased in response to the highest dose of the extract (250 mg/kg, i.p.). Interestingly, the extract had no effect on brain serotonin or norepinephrine concentration. Our findings show that the aqueous extract of saffron contains an active component that can trigger production of important neurotransmitters in brain, namely, dopamine and glutamate. In addition, these results provide a cellular basis for reports concerning the antidepressant properties of saffron extract in humans and animals.


The Effect of Crocus sativus L. and Its Constituents on Memory: Basic Studies and Clinical Applications
Nikolaos Pitsikas

Abstract
Memory-related disorders are a common public health issue. Memory impairment is frequent in degenerative diseases (such as Alzheimer’s disease and Parkinson disease), cerebral injuries, and schizophrenia. The dried stigma of the plant Crocus sativus L. (C. sativus), commonly known as saffron, is used in folk medicine for various purposes. Several lines of evidence suggest that C. sativus and its constituents are implicated in cognition. Here we critically review advances in research of these emerging molecular targets for the treatment of memory disorders, and discuss their advantages over currently used cognitive enhancers as well remaining challenges. Current analysis has shown that C. sativus and its components might be a promising target for cognition impairments.

Abstract:
Objective: Asthma is a chronic inflammatory disease of the respiratory airways distinguished by edema and infiltration of inflammatory immune cells. To test our hypothesis about the anti-inflammatory effect of saffron, we examined effects of Crocus sativus (C. sativus) extract as a prophylactic anti-inflammatory agent in sensitized rats.

Conclusion: Our findings indicated that the extract of C. sativus could be useful to prevent asthma as an anti-inflammatory treatment.